A bollard is a sturdy, short, vertical post. The term originally referred to a post on a ship or quay used principally for mooring boats, but is now used, primarily in British English, to refer to posts installed to control road traffic and posts designed to prevent ram raiding and car ramming attacks. 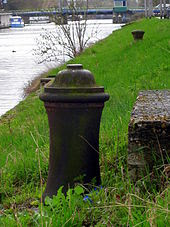 In the maritime contexts in which the term originates, a bollard is either a wooden or iron post found as a deck-fitting on a ship or boat, and used to secure ropes for towing, mooring and other purposes; or its counterpart on land, a short wooden, iron or stone post on a quayside to which craft can be moored. The Sailor's Word-Book of 1867 defines a bollard in a more specific context as "a thick piece of wood on the head of a whale-boat, round which the harpooner gives the line a turn, in order to veer it steadily, and check the animal's velocity".[1][6]

Mooring bollards are seldom exactly cylindrical, but typically have a larger diameter near the top to discourage mooring warps (docklines) from coming loose. Single bollards sometimes include a cross rod to allow the mooring lines to be bent into a figure eight. Small mushroom-bollards are found on lock approaches for advancing boats waiting for lock access.

A conventional measure of the pulling or towing power of a watercraft is known as bollard pull, and is defined as the force exerted by a vessel under full power on a shore-mounted bollard through a tow-line. 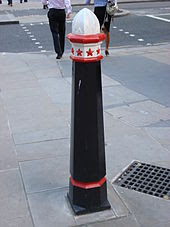 A street bollard in City of London colours

Permanent bollards intended for traffic-control purposes may be mounted near enough to each other that they block ordinary cars, for instance, but spaced widely enough to permit special-purpose vehicles and bicycles to pass through. Bollards may also be used to enclose car-free zones. Bollards and other street furniture are used to control overspill parking onto sidewalks and verges.[9] 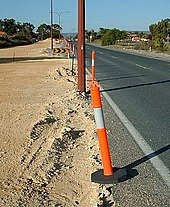 Bollards can be temporary and portable, as this traffic control bollard separating the road from the worksite.

Tall (1.15 meter/4 foot) slim (10 cm/4 inch) fluorescent red or orange plastic bollards with reflective tape and removable heavy rubber bases are frequently used in road traffic control where traffic cones would be inappropriate due to their width and ease of movement. Also referred to as "delineators", the bases are usually made from recycled rubber, and can be easily glued to the road surface to resist movement following minor impacts from passing traffic. The term "T-top bollards" refers to the T-bar moulded into the top for tying tape. Bollards are regarded as an economical and safe delineation system for motorways and busy arterial roads; and, in conjunction with plastic tape, for pedestrian control.

Traffic bollards used in the US are very similar to devices found throughout the UK, with the following exceptions:

Internally illuminated traffic bollards have been in existence throughout the United Kingdom and Ireland since the 1930s, although the term "bollard" only seems to have been in common use since the late 1940s.[1] An illuminated bollard has a recessed base light unit in the foundation which illuminates the traffic bollard from all angles.[11] The main components are housed below the road or pedestrian surface (typically a concrete surface). Therefore, if a vehicle strikes the traffic bollard, the units below the surface are not damaged.

Internally illuminated traffic bollards direct vehicles to the appropriate side of an island in the United Kingdom.

They are primarily used at roundaboutintersections within the splitter islands (a raised or painted area on the approach of a roundabout used to separate entering from exiting traffic, deflect and slow entering traffic, and provide a stopping place for pedestrians crossing the road in two stages)[12] and at the ends of pedestrian refuge islands, typically located at mid-block pedestrian crosswalks. Illuminated bollards are also used in Hong Kong, a former British colony.

Illuminated bollards are also used to supplement street signs and street lighting to provide a visual cue to approaching drivers that an obstacle exists ahead during hours of darkness and during periods of low visibility:[13][14] (fog, rain, snow, haze, etc.) and to indicate that braking may be required.

Reflective bollards may also be used; they need no power or maintenance, and can be built to recover to their normal position after being struck.[15] 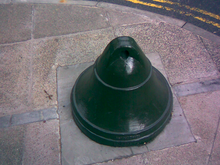 A bell bollard is especially useful to deflect heavy vehicles.

A bell bollard is a style of bollard designed to deflect vehicle tires. The wheel mounts the lower part of the bollard and is deflected by its increasing slope. Such bollards are effective against heavy goods vehicles that may damage or destroy conventional bollards or other types of street furniture.[16] A variant on the bell bollard is the "Martello bollard", its sloped shape inspired by the profile of historic Martello towers.

Bollards may be hinged at ground level, allowing them to be folded flat to permit vehicles to drive over them. In such cases they are generally fitted with padlocks at the base, to prevent being lowered without proper authorization. 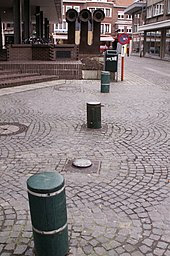 Rising bollards can be retracted into the roadway to allow traffic to pass, or deployed to stop it.

Removable bollards may be fitted into a permanent metal ground socket, from which they can be removed entirely to allow traffic to pass. A polypropylene ground socket is also available that protects the paving and foundations from damage when the bollard is struck. This design uses a self-locking taper to enable bollards to be easily removed and relocated.

Retractable or "rising" bollards can be lowered entirely below the road surface (generally using an electric or hydraulic mechanism) to enable traffic to pass, or raised to block traffic. Rising bollards are used to secure sensitive areas from attack, or to enforce traffic rules that are time related, or to restrict access to particular classes of traffic.

Manually retractable bollards (lowered by a key mechanism) are found useful in some cases since they do not require retrofitting into existing landscapes, or any electrical hookups or hydraulic systems.[17]

The term "robotic bollards" has been applied to traffic barricades capable of moving themselves into position on a roadway.[18]

Self-righting or self-recovering bollards can take a nudge from a vehicle and return to the upright position without causing damage to the bollard or vehicle. They are popular in car park buildings and other areas of high vehicle usage.[19]

Flexible bollards are bollards designed to bend when struck by vehicles. They are typically made from synthetic plastic or rubber that is stiff on its own, but pliable under the weight of a car or truck. When struck, flexible bollards typically bend 90 degrees to ground—avoiding damage to vehicles and surrounding surfaces—and return to their original, upright position. [20][21][22] While flexible bollards do not provide physical protection from vehicles, they offer clear visual guidance for drivers.

Some forms of motorsport use removable, high-visibility bollards on road courses and street courses to mark the apex of certain corners. They are used to deter cutting a corner too tightly and violating track limits: in most racing series, drivers may incur a penalty for colliding with or driving inside these bollards.

Racing bollards are very lightweight and built to break off at the base when hit so as to not damage the vehicle; this feature of bollards makes them favored over "sausage kerbs"—also used to prevent cutting corners—which are elevated rigid structures that run along the inside of a turn. In contrast to bollards, sausage kerbs are much more unforgiving, and vehicles that hit them can be severely damaged or launched airborne upon contact.

A more recent development in bollard technology are bollard covers. They are used by many industries and communities as a cost effective way to increase safety and refresh old and worn out looking bollards without having to completely replace the original bollard. They slip over the existing bollard and can come in a variety of shapes and styles. Because they are easily removable they can be replaced quickly and depending on their material they may never need painting and are resistant to scratching and other wear and tear. Traffic bollard covers are typically made of tough recycled plastic and have high visibility colours to ensure motorists see them. Decorative bollards are used in street areas to enhance display and may come with LED lights to increase visibility and safety at night. [23] 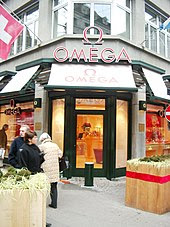 Security bollard in front of a shop doorway, placed to deter ram-raiders 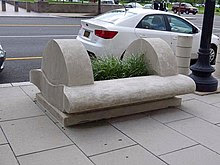 Bollards are used by government agencies and private businesses to protect public spaces, buildings, and the people in them from car ramming attacks.[24] They usually consist of a simple steel post either anchored to concrete, cored into a hard surface, buried in the ground or secured on a self-locking taper or impact recovery system to protect the surrounding foundations when a bollard is struck.

These bollards protect utilities, electronics, machinery, buildings, or pedestrians from accidental collisions by vehicles, including passenger vehicles, transport trucking, and fork lifts. As collisions can cause damage to vehicles, operators, or the bollards themselves, new bollards have been developed that absorb some of the impact energy, lessening the violence of the collision. Some are made of forgiving plastics while others are made of steel but fitted with an elastomer to absorb the impact energy.[25]

Bollards are widely used to contribute to safety and security. The American Bar Association (ABA) states that bollards are used to contribute to homeland security.[26]The American National Institute of Building Sciences site—the Whole Building Design Guide (WBDG)—recommends in its Design Guidance that open spaces surrounding and contiguous to buildings be included as integral parts of a security design.[27]

There are two main kinds of security-related bollard:

According to the National Institute of Building Sciences, non crash-resistant bollards are "perceived impediments to access" and address the actions of two groups.

Rising bollards are increasingly common around the world to hinder vehicle-based terrorist actions from achieving close proximity to buildings, and are also used to prevent terrorist vehicle-ramming attacks such as the 2007 Glasgow International Airport attack. They are also useful in mixed-use public spaces, which support both pedestrian use and emergency or service vehicle use. These bollards are usually priced between $11,000 to $100,000 depending on their ability to resist ramming vehicles, based on speed. The most expensive bollards can stop vehicles at speeds of about 50 mph (80 km/h).

Bollard sleeves in various alloys or finishes are designed to cover security bollards to enhance their visual attractiveness.[30]

U-Shaped Bollards are typically used for the protection of equipment and are very common in areas that need coverage over a wider area than of a normal Bollard, such as Fuel Stations and Bike Lanes. [31]

Bollard lights are a type of architectural outdoor lighting fixture comprising short, upright ground-mounted units, typically giving off light from the top or the sides, and used to illuminate walkways, steps or pathways.

Solar bollards store energy during daylight hours in order to illuminate during night. They use either a photocell or algorithms that determine whether the solar cells are receiving light to determine when to illuminate.